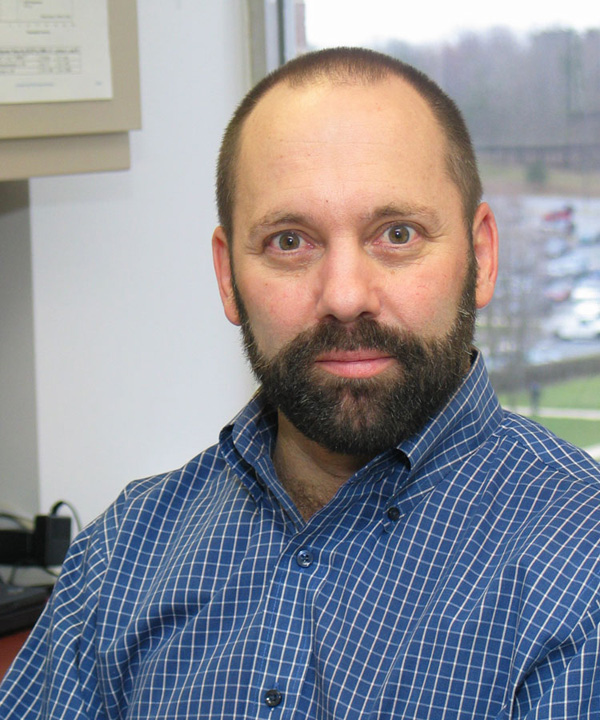 Matthew Greenhouse has served on the James Webb Space
Telescope senior staff as Project Scientist for the Webb science
instrument payload since 1997. He specializes in infrared imaging
spectroscopy, development of related instrumentation and
technologies, flight project science, and technical management.
Greenhouse began work in infrared astronomy during 1979
when, after receiving a Bachelor's of Science degree in
Geosciences from the University of Arizona, he joined the
Steward Observatory as an instrument technician for balloonborne and Kuiper Airborne Observatory science instrument
development. During 1983, he joined the Wyoming Infrared
Observatory as a graduate student in physics. After receiving a
Ph.D. in Physics from the University of Wyoming during 1989, he
joined the Smithsonian Institution in Washington DC as a Federal
Civil Service astrophysicist. He then joined the NASA Goddard
Space Flight Center during 1996 in the same capacity.
Team Biographies
TOP
Greenhouse has served on several NASA and European Space
Agency (ESA) flight mission teams. He supported ESA's Infrared
Space Observatory mission as a member of the Long Wavelength
Spectrometer instrument team. He supported the NASA
Stratospheric Observatory for Infrared Astronomy mission by
serving on its Independent Annual Review Board as Co-Chair, and
served on both its Interim Management Review Board, and
Science Steering Committee. He supported the NASA Spitzer
mission by serving on its Community Task Force as Legacy
Science Program Chair and the Hubble Space Telescope Wide
Field Camera 3 instrument project by serving on numerous
gateway technical review boards. Greenhouse has been a
member of the NASA Astrophysics Working Group, and has
supported ground-based astronomy through membership on the
National Science Foundation Committee of Visitors, and
numerous selection committees and review boards for major
ground-based instrumentation.
Greenhouse is the recipient of more than 20 individual
performance awards and honors including: the NASA Exceptional
Achievement Medal and the Robert H. Goddard award for
Exceptional Achievement in Science.
Greenhouse's post-graduate professional training includes
completion of more than 20 courses in technical management,
public leadership, and engineering from the Brookings Institution,
The University of California Los Angeles, the NASA Academy of
Program/Project & Engineering Leadership, and the Federal
Executive Institute. Greenhouse received a Certificate in Public
Leadership from the Brookings Institution during 2012.
Greenhouse is an avid sailor. View A brief Curriculum Vita. He is
author of more than 100 publications.

The James Webb Space Telescope is the successor to the Hubble Space Telescope. It is the largest space telescope ever constructed, and will extend humanities’ high definition view of the universe into the infrared spectrum. The Webb will observe early epochs of the universe that the Hubble cannot see to reveal how its galaxies and structure have evolved over cosmic time. The Webb will explore how stars and planetary systems form and evolve and will search exoplanet atmospheres for evidence of life. The Webb’s science instrument payload includes four sensor systems that provide imagery, coronagraphy, and spectroscopy over the near- and mid-infrared spectrum. NASA developed the JWST in partnership with the European and Canadian Space Agencies, with science observations proposed by the international astronomical community in a manner similar to the Hubble. Launch of the Webb occurred during 25 December 2021. The Webb is currently undergoing in-flight commissioning in preparation for the start of science operations. Short biography: http://jwst.nasa.gov/meet-greenhouse.html